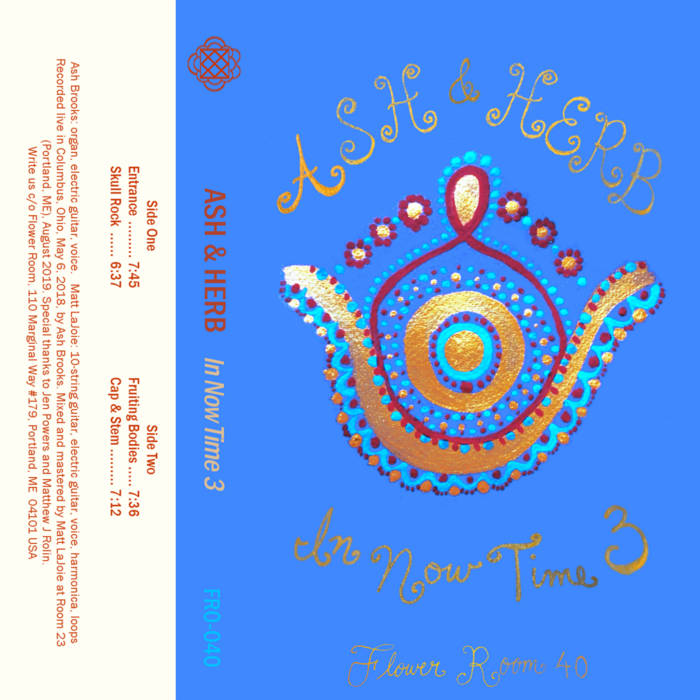 "Flower Room, the resident home of Matt LaJoie and Ash Brooks’ musical musings, often boasts a treasure trove of small press releases that are of the blink and you’ll miss ‘em variety. In between larger statements the pair populate the label’s Bandcamp with live documents and offshoots in every direction under the Ash & Herb, Starbirthed, ML Wah monikers, among many. One of the latest gems arrives via live recordings from Ash & Herb’s Spring 2018 tour, and makes up the third installment of their live “In Now Time” series. While it’s not a full-on psych-folk boogie breaker in the mold of their outstanding “Salt Lick” single from February, it does capture the band’s narcotic float quite nicely. The set was recorded in a living room in Columbus, OH, but the sounds feel like they could have filled up a void twice that size.

Apparently, their set for the tour was using a cassette backing track that they tossed for the night and untethering from the percussive yoke lets the band wander all over the inky night, swirling like smoke signals into the wanting sky above. Ash’s vocals zone out into wounded, wooded rites of passage, giving the set a heavier, darker turn for a spell, before they bloom into a two-part psilocybin sojourn. “Fruiting Bodies” sparkles to the point of shimmer and closer “Cap & Stem” settles the whole set into a steamed calm as it pits a bit of twang against the dominant drones. Ash & Herb have a huge catalog to contend with but its been great to keep track of the current modes with this live series and it’s highly recommended digging through vols. 1 and 2 as well. Pair this one up with a recent Starbirthed tape and the night’s set to transcend expectations." - Andy French, Raven Sings The Blues

The third volume of Ash & Herb's In Now Time series carries an intimate highlight from their Spring 2018 Midwest US tour out to the world at large. Performed in a living room in Columbus, Ohio as the final show of a tour whose axis was an appearance at Milwaukee Psych Fest, the duo opted to forego the cassette-backing-track and live-percussion-loop rhythmic drive of previous shows on that tour, and instead were inspired to dig deeper into space-folk improvisations with free-range solos and kosmische detours that set up delicate renditions of a couple Northern Lights favorites.

Opening with the desert-skies-at-night-evoking "Entrance," Ash & Herb set the stage with bowed and fingerstyle strings, dusty harmonica, and celestial organ tones, building to a galloping finish at the foot of "Skull Rock". Their most frequent live set (and Now Time) staple, "Skull Rock" in this context soars on the strength of both the dreamy vocal incantations and the intuitive approach to structure and form that sets it apart from both the album version and previous live offerings.

Side two begins with the instrumental ode to the mushroom kingdom, "Fruiting Bodies", which made its recorded debut on February's Now Time 2 and first became a regular live hit on this tour. As a simple set of major key guitar chords is looped and cycled, phased organ and bouncing clean-toned guitar notes grow and spread around the field, until a fuzzed-out lead sends spores adrift and demonstrates the majestic inspiration afforded by communion with the agaric realm. This leads, naturally, into "Cap & Stem", a psychedelically-tinged folk-country invitation to open to the possibility of higher realms of consciousness. Spectral voices harmonize over a rare dual-guitar look from Ash & Herb, culminating in an open-sky, wah-wah drenched electric guitar solo played by Ash before a final verse brings the listener home with a gentle landing.

Volume 3 is the first In Now Time release to be available on cassette outside of an art edition vinyl bundle, and is offered here in a limited, one-time-only numbered edition of 50.

Music and lyrics by Ash & Herb. Recorded live in Columbus, Ohio, May 6, 2018, by Ash Brooks. Mixed and mastered by Matt LaJoie at Room 23 (Portland, ME), August 2019. Cover art and layout by ML. Special thanks to Jen Powers and Matthew J Rolin.

Exploration & discoveries in improvisation & harmonization ☄ Tonal cosmology, virtual rurality, and hymns inspired by the cosmos and the natural world, to heal and inspire a more harmonious You-We-All ☤ Welcome

Bandcamp Daily  your guide to the world of Bandcamp